Or more of a ding… But yes, it’s a wrap for ELEY’s Speed Steel events for 2019. Last week (10th – 12th October), the final competition took place at Stourport Rifle & Pistol club and what an event it was. Contending with wind, rain and the occasional dry spell, our shooters took to the firing line to shoot a sequence of steel plates in the fastest time.

The third and final event kicked off with a masterclass from USPSA Grandmaster, Kurt Grimes. He hosted an ‘Outer Limits’ day which included equipment demos, information and advice as well as the opportunity to shoot with the man himself.

Kurt stuck around to compete alongside the UK entrants in the main competition. Unsurprisingly, Grimes flew through the course with a score of 71.29 seconds in the mini rifle discipline. The best score from the day. It was an absolute pleasure to have Kurt and his wife Maria with us and to learn more about Speed Steel shooting and how it differs in the US.

Speed, accuracy and power were the skills required to take the top spot, and Chris Edwards and Josh Kenny embodied just that as they claimed 1st place in the LBP and Mini Rifle disciplines respectively.

In the LBP discipline John Chambers climbed to 2nd place with 88.71 seconds whilst David Ashcroft finished in 3rd with 96.85.

Click here for full results from the October challenge, as well as event photographs.

Are you interested in competing in ELEY’s 2020 Speed Steel Challenge events? 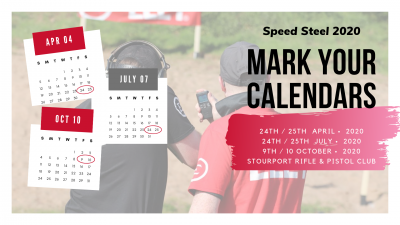